Ferries (all licensed by the Maritime Coastguard) depart from Morston Quay and trips to the Seals and Birds last for approximately an hour (1½ hours with landing). Trips run every day throughout the season (1st April until 31st October) and regularly throughout the winter, as we are limited by tide times our departure times change daily and are mostly displayed on our timetable but we also run extra trips at busy times. Beans Seal Trips have been a family run business for over 50 years and are a very popular and safe way to enjoy a close up view of the wildlife without disturbance. Our fully trained and knowledgeable crew will be on hand during your trip to provide local information and answer any questions

After boarding the ferry there is a short safety briefing as we make our way up the creek and out into the harbour. After a short boat ride, with local information provided by the crew, we arrive at the seals. They are usually basking on the sandbanks at the far end of Blakeney Point. You should always see some seals - the question is: “How many”? The colony is made up of Common & Grey seals and numbers around 500. Common seals have their young between June and August, the Greys between November and January. Both suckle their pups for about three weeks during which time they grow very quickly, putting on between 1kg and 1.6kgs a day due to the very rich and fatty milk they feed on. 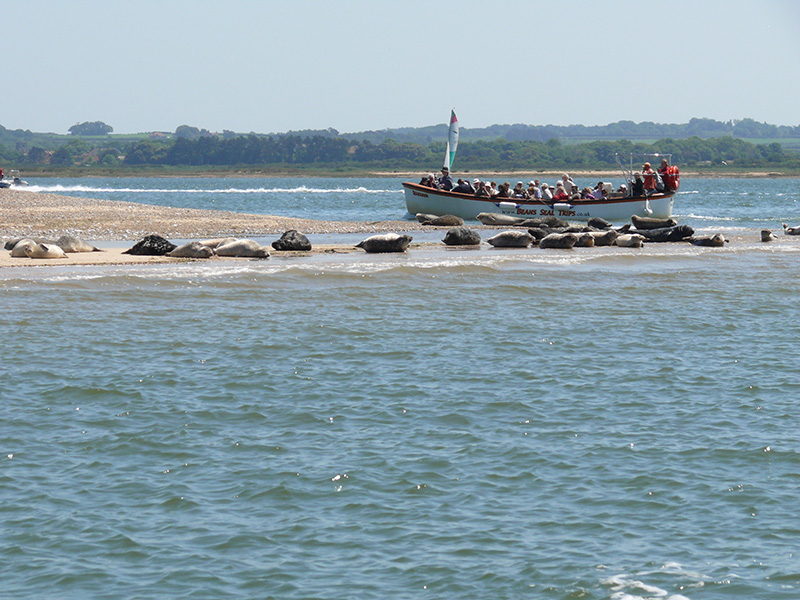 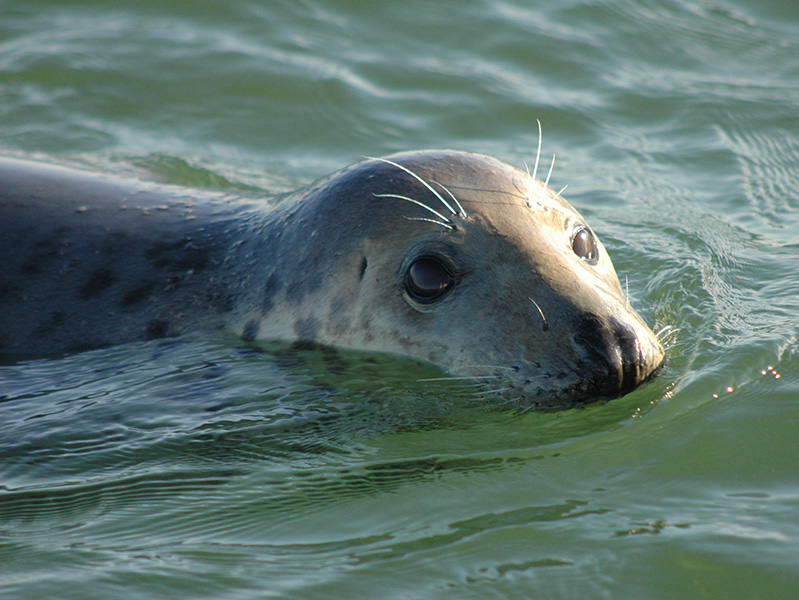 The seals are generally quite inquisitive and often pop up and swim around the boats for a look at us! We can also usually sail very close to the basking seals on the beach which gives a great opportunity for photographs and also ample time for questions. The grey seals are the larger of the two species - they have large speckles on their coats and longer pointed heads with parallel nostrils. The common seals have a more rounded face with ‘v’ shaped nostrils.

On many of our trips, after seeing the seals, we will then land you onto Blakeney Point if you wish. The duration of your stay will depend on tide and weather conditions but is usually between half an hour and an hour. The National Trust took over the Point in 1912 and it is now an international breeding ground for many migrant birds during both summer and winter. During your visit you may like to take a stroll up to the Old Lifeboat House. This is now used as a base for the Wardens during the summer and also as an Information Centre. Or you may like to head for one of the hides which are located at prime sites – from these you can take a closer look at the breeding birds. Alternatively, just take it easy and relax near one of the many secluded sand dunes. The beach at the Point is also a safe spot for the children to have a splash about along the shoreline. 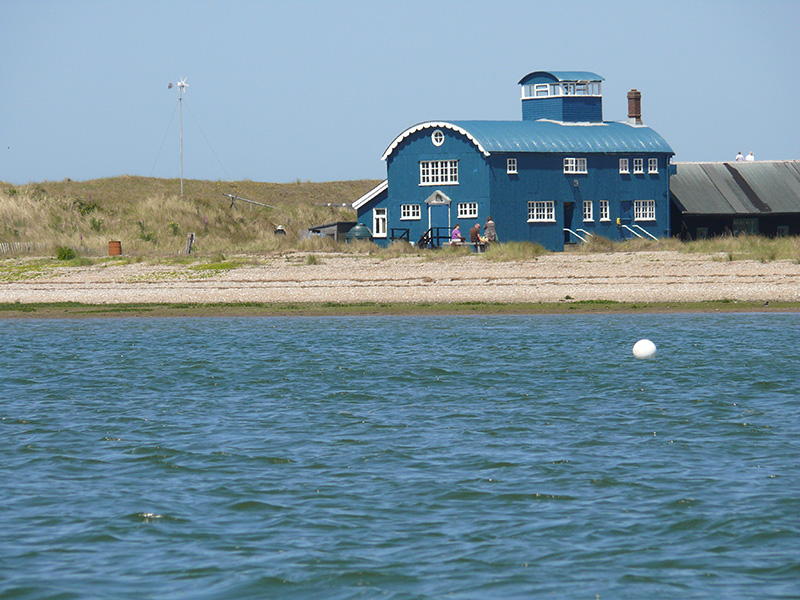 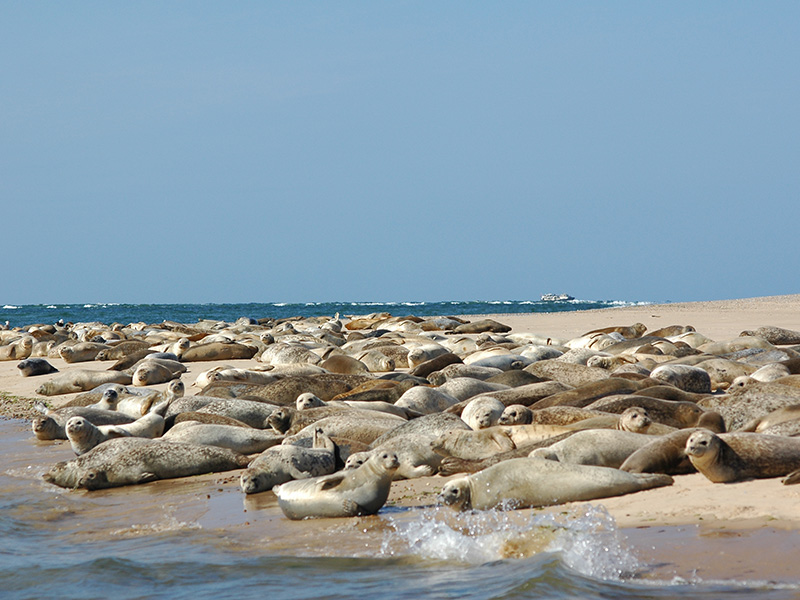 Seals generally spend up to 90% of their lives out of the water basking on the sandbanks. The females usually outlive the males: 35 years is about the maximum for them and 25 years for the males. Although very clumsy and cumbersome on land, once in the water, seals can be very agile, reaching speeds of up to 20mph. They can also submerge for up to 30 minutes if necessary and in certain waters have been recorded diving to a depth of 600ft (300 metres). Generally though, it’s a quick 3 - 5 minute dive for fish which the seals locate in the water not only by sight but also by feeling vibrations through their whiskers. Seals tend to feed out at sea although some of their favourites – flounders, white bait and sand eels - are often found in the Harbour. An average size seal can often take up to 10lb (22kgs) of fish in a day.

Blakeney Point is also famous for its bird life. Its most popular summer visitors are the terns - mainly Common, Sandwich and Little Terns and, quite often, also Arctic Terns. Many of them begin to arrive from West Africa during mid-April and breed into the season. They make a small scrape in the shingle where they lay their eggs. After hatching, the chicks can be seen running along the shoreline near the seals. You will be able to get a good view of them from the boat as well as of the other various shorebirds: Oyster Catcher, Ringed Plover, Turnstone, and Dunlin to name but a few. During the winter months, you will see large numbers of duck and geese including Mallard, Widgeon, Teal, Pintail, Pinkfooted Geese. Greylag and Brent Geese usually arrive from October onwards. 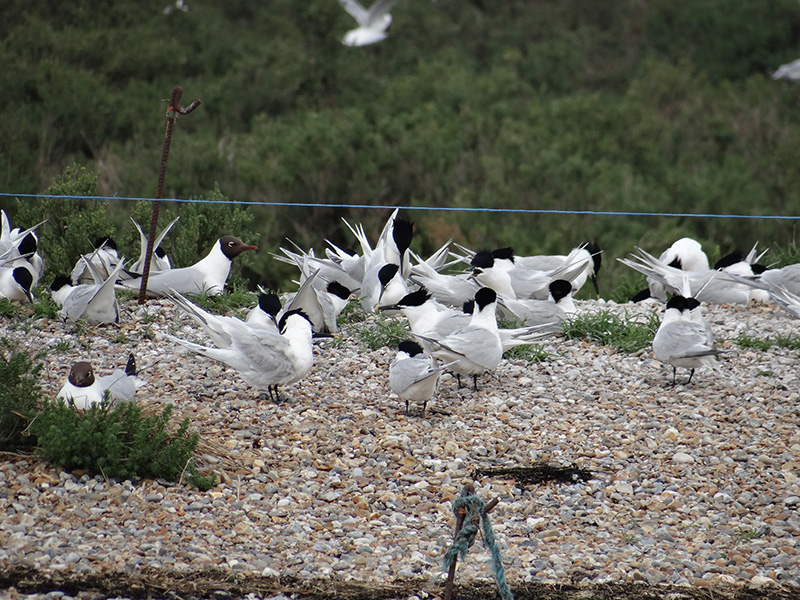